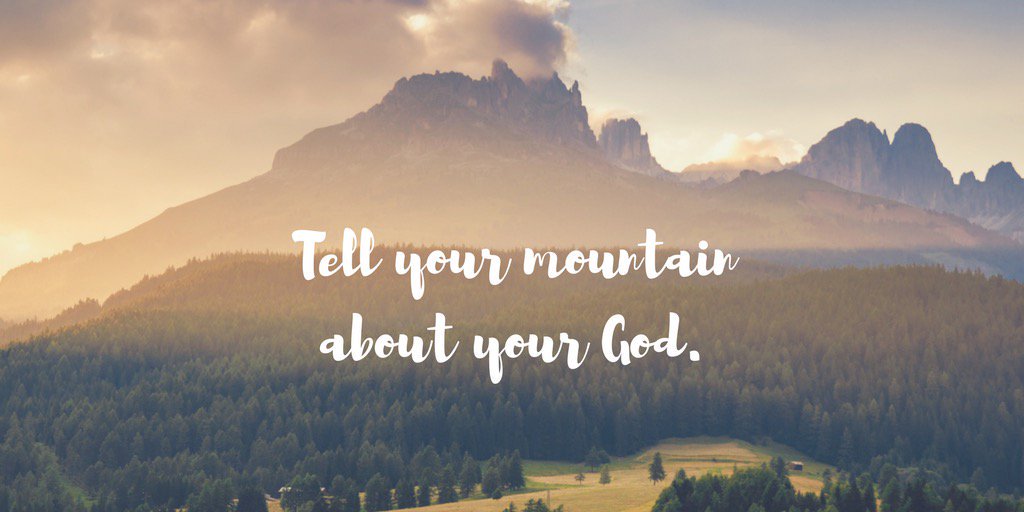 Always have been.  It’s probably genetic, although I think it skipped my parents’ generation.  My mom says that if I don’t have something to worry about, I’ll find something.  It’s called borrowing trouble.

I recently made a list of the things that I fear, that I worry about, that wake me up in the middle of the night in a cold sweat and threaten the peace that I hold so dear.  This was really important, because lately it has seemed that fear has been in crazy pursuit of me.  I mean, an all-out hunt for my heart.  I made this list as part of a prayer, fully intending to give the list to God in exchange for that peace that passes all understanding He is so good at giving.

That’s not how things played out.

Instead, I pictured a mountain, and I heard the phrase “tell your mountain about your God.”  I’ve seen that phrase a million times; I always thought of it as a clever script-flip on telling God about your problems…but I hadn’t really considered what it meant.  Until I had a list of mountains, and I had told God all about them, but suddenly sensed that maybe they needed to hear about my God too.

So, I kid you not, I told my mountains about my God.  As in, I stood in my bedroom and had a conversation with each of them.  (I’m not nuts, I swear.)  For example, one of my worries (that exists every time I have a move coming up) is about finding a home in my new location.  I told that mountain about my God who is Himself a shelter and a refuge, who could snap His fingers and create the house that is best for my daughter and me if He chose to.  I told that mountain about how God has never failed me in this area; I said this as I stood in the bedroom of the home discovered three months before moving to this assignment, for a great price, in a great area.  I told that mountain that it might as well shrink into nothing, because my God would make quick work of it in no time.

I went through every item on my list – some huge, some small, all important enough to gnaw at my soul in the late hours of the night.  I told each of the mountains about my God, about His character, about His willingness and ability to fight for me and for my daughter and to prepare the way ahead for us.  I regaled them with stories of His faithfulness, over and over, again and again.  And as I did so, my mountains transformed.  They were no longer huge, hulking obstacles to overcome; they became an audience – an audience for watching my God work, and my telling of who He is and what He can do was simply the opening act.

I told my mountains about my God, and I ended up reminding myself about who He is.  His character, His faithfulness, and His promise were enough to melt the giants into nothing.  The worry, the worst-case scenarios, the lies, the cringe-worthy things that my brain comes up with in the middle of the night – none of them can stand when faced with who He is, the light He brings, and the fierceness with which He fights for His own.

I made a list of my mountains and expected God to just handle it.  He could have, obviously.  But there’s something about facing the mountains and watching the magic happen simply by declaring God to be who He says He is.  Where the mountains disappeared into nothing, my faith grew in their place.  God handled it, just not the way I expected – but that’s usually so much better anyway.

Do you have mountains?  Of course you do.  We all do.  I challenge you to tell them about your God…